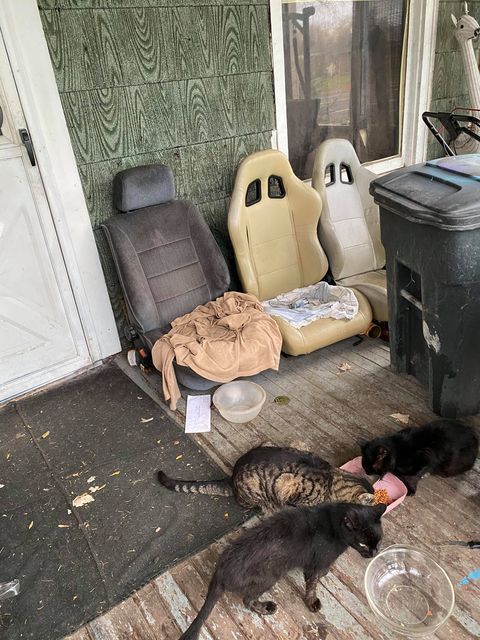 Browncoat Cat Rescue focuses on feral and discarded cats.  Discarded.  To discard: get rid of (someone or something) as no longer useful or desirable.
This Waterloo house was abandoned, and along with it the seven cats who lived in it.  The blind tabby found a home with the neighbors; the people decent enough to keep feeding them after their person left.
Two went missing; either deceased in the house, or out into the world.
Four joined BCR’s crew, and got medical attention for the second time in their lives.  (Unlike many of the discarded cats we take in, all the boys were fixed!)
We took in Nixie, dilute torti, and wonderful mother of grey boy Owl.  She’s about three, and he’s two.  They are strongly bonded, and are fostered together.  Owl is gorgeous, and the healthiest of the bunch.  Nixie’s skin is more scab than anything else, but she’s so grateful to have someone to rub her ears.

The neighbors hit dead end after dead end trying to help these cats, until they reached out to Browncoat Cat Rescue.  And our amazing community of cat lovers rallied, and donated to their care so we could get them inside and get the care they so desperately needed.  As any pet parent can tell you, dental work isn’t cheap!
The neighbor who had been feeding them brought them to BCR, and our amazing vet saw them in her home, so they could come inside asap.  Everyone was super well behaved at the vet, just solidifying our desire to see these cats treated as well as they deserve!  Nixie and Owl are in a foster home, adjusting to being cared for again.
Hiccup and Toothless will stay at BCR headquarters until they are out of the woods.

It would be easy to rail against the unfairness of these wonderful cats being abandoned; left behind like a smoldering cigarette butt that has no value to anyone.

It would have been easy to bring them to a shelter who would have euthanized them because they were distraught, and unwell, and a really expensive fix.

Luckily for them, people are decent.
They were brought to a rescue that brims with love, and fights for their cats until the bitter end.
Amazing people in our community gave what they could, to see them safely inside and cared for.
They were given the care they so desperately needed.

And now the next chapter of their lives can begin.
A chapter of love, and gratitude.

We are so thankful to everyone who helped these cats, and continues to be a brilliant ray of sunshine on an otherwise grey day.  We love you.

Read more on this topic

We need Help to continue

8 Tips on How to Train a Dog